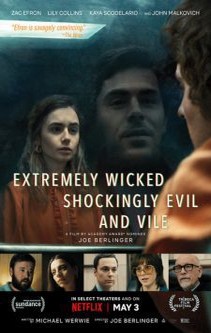 Mom and I sat down and watched the newest Ted Bundy movie on Netflix last night, titled Extremely Wicked, Shockingly Evil and Vile. These are my thoughts.

First, right off the bat- Zac Efron did a damn good job. As a 35 year old adult, I mostly knew him as being ‘one of those Disney type’ kids. I’d seen him in Neighbors and in the wedding movie, but that simply cast him as ‘one of those Disney type kids that has something to prove’. I admit, it’s not fair and is a stereotype, but Disney does tend to have a strange effect on their child stars.

I digress. Watching Extremely Wicked, I was stunned at just how well Efron was able to portray the notorious Bundy. The mannerisms, the clothing. The charm that covered the small glimpses of the anger beneath. Overall, I felt he did a fair job with portraying such a well-known killer. Most of the complaints I saw leading up to the premiere centered around Efron’s looks. That he was too handsome, and women would make him into a sexual fantasy, even though he was playing a character that should be abhorrent.

But isn’t that the point?

Bundy achieved what he did and got away with it because he didn’t look like a monster. He looked like an every day man you would pass in the street without a second glance. He was charming, intelligent, and good looking. That was part of what made him the enigma he was, and what made him so dangerous. He could lure women in easily, because everyone expects monsters to look like monsters and good guys to look like clean-cut attractive men.

I feel like this is the type of movie that should be shown more often. People are so trusting, they’ve forgotten their instincts. We get into cars with strangers. We meet strangers from online. We have groceries and food delivered from independent contractors we don’t know. It’s high time people remembered that killers look like each and every one of us. They don’t have flashing neon lights above their heads showcasing their depravities.

I was more disappointed that the movie focused mostly on his incarceration and trial. While those aspects are important, the title leads one to believe it would focus somewhat on his crimes as well. To me, for those that don’t know Bundy and were tuning in, showcasing what he did would have sent a far deeper message than simply focusing on what his punishment was.

Be leery of those around you, because you never know what’s lurking behind their facade.