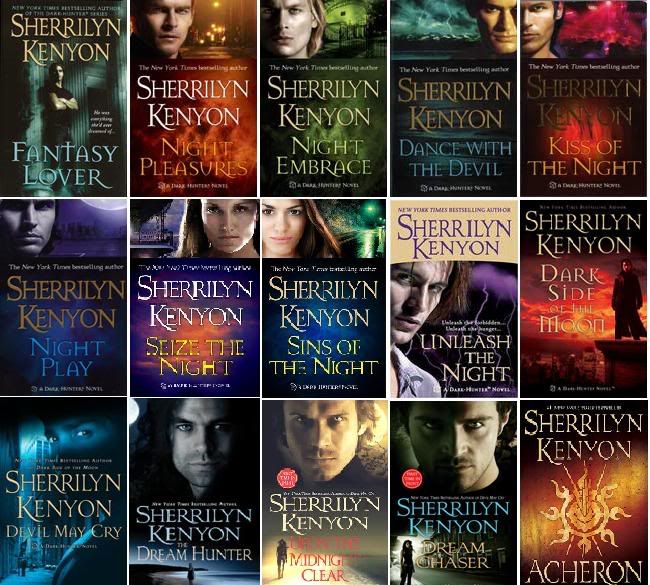 In the world of the Dark-Hunters nothing is ever as it seems. Life and death both take on a whole new meaning as this immortal cadre of warriors fight to protect mankind from those creatures and demons who would prey on us. It’s dark. It’s deadly and it’s a whole lot of fun and laughter.

Every once in awhile, you find a series that takes you by the throat and won’t let go. This was that series for me. I lost most of my books in a basement flood, so I’m going through and collecting them again, this time in hardcover. I fell in love with the world and the characters, so much so that they were the very first and only canon characters I roleplayed. I had so much fun bringing them to life, because Miss Kenyon gave us such a rich storyline to draw from.

If you’re a fan of mythology, you’ll find so many here. Greek, Roman, Atlantean, Sumerian, Lemurian, Native American, Egyptian… Kenyon manages to tie all the myths and legends together into a cohesive story that crosses time and space. If you’re looking for creatures? She’s got them too. From demons to daimons, gods to demigods, dozens of shifters, and even Chthonians, there isn’t any myth or legend that she hasn’t woven a new twist from.

The only thing I dislike is that she seems to have lost track a bit. The world is so sprawling that she’s adding more and more people, and we’re still kind of waiting for stories of people we’ve gotten to know from earlier in the series. Though, as a writer myself, I know that sometimes some voices just won’t talk and others speak up louder.

The series has spawned numerous side-series as well, which is interesting as one is even a YA offering, which deals with some of the characters when they were teens, before the events of the Dark Hunter series. They’ll eventually cross, and all the decisions made in the YA series will affect what happens in the later books. Which is a really neat way to do things, in my opinion… it keeps readers engaged for years!

Overall, definitely an author and series you won’t want to miss if you’re into paranormal or mythological reads. This one is forever on my ‘keeper’ shelf.